When my feet first touched Indian soil in 1986, I felt as if I had finally found my home. Since that time, my destiny has led me back to India time and time again, first to study sitar in Shimla, then to study Sanskrit in Varanasi and then to live here continuously from 2001 until 2010.

These trips etched in my heart and mind images, feelings and ideas which shaped my world view and the subsequent pattern of my life. The sunrise painting the cliffs of the Himalayas at dawn, the prayerful rituals on the banks of the Ganges, solitary treks to the sacred temples in the mountains; these images became an indelible part of my inner life.

Pilgrimage on the Path of Love unraveled in the jungles of the Himalayas in Manali. I used to come to sit beneath the towering deodar trees in the early morning when the sun poured its liquid radiance through the leafy bowers. The jungle in its cool still verdant beauty invited introspection, and my fingers raced over the blank paper in an effort to keep up with the rapid tempo of thoughts and feelings flitting like fireflies through my mind.

During my travels in the mountains of Manali and Ladakh, each person I met shared a fragment of their life with me and the multi-colored fragments, like beads on a thread, wove the necklace I carried with me, as an inner adornment, a cherished memory of a country to which I felt I belonged. If I had to choose a country to which my inner being is most resonant, I would unhesitatingly choose India.

In Pilgrimage on the Path of Love, we enter the interior world of a woman on the spiritual path and we see how the spiritual dimension of life in India fosters in her a deeper understanding of the ultimate quest of human life: enlightenment.

My new book – Available on Amazon 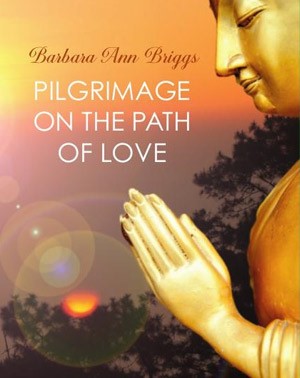